As the community of Madison, SD becomes more diverse, language barriers continue to be an issue for local business owners and community members. Recognizing the need to improve communication, the Lake Area Improvement Corporation recently offered a new public education class for non-English speaking individuals, English as a Second Language, or ESL.

“Our businesses, schools, hospital, restaurants and stores are finding it increasingly difficult to communicate with non-English speaking residents and employees,” said LAIC Executive Director Julie Gross. “At the LAIC, we want to help these entities as well as make life easier for those who don’t speak English.”

Gross reached out to the Department of Labor (DOL), Career Learning Center, Madison Central School District and Dakota State University for guidance and assistance in developing an ESL program. She established a Madison community ESL board, recruited full-time and substitute teachers, and secured funding from Interlakes Area United Way and other organizations.

An eight-week ESL course kicked off September 8 with classes being held at the Madison High School Tuesdays, Thursdays and Saturdays. Twenty-six people enrolled in the program. Primarily Hispanic, the students worked at a range of local businesses, including Rosebud Manufacturing, PPD, G.A. Murdock, Persona, Global Polymer, Cederberg Dairy, and more.

“We had three instructors and offered both a basic and advanced class,” said Gross. “Initially we worked in small groups on basic language–greetings and responses, days of the week, months of the year and colors. Later we moved on to fruits, vegetables, medical terms, how to communicate with doctors, teachers, employers, and more.”

Gross said the instructors continually adapted the curriculum based on the needs of the students. With help from volunteers, the class was also able to offer childcare while parents learned. 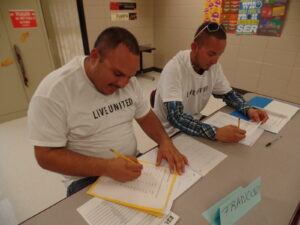 “It was incredibly rewarding,” said Gross. “They were an awesome, dedicated group of students. It was heartwarming to see them learn English–which is not an easy language to learn–and we tried to have a little fun and laugh too.”

The ESL board distributed registration forms at local manufacturing companies as well as the DOL and LAIC offices in Madison. Participants were charged a nominal registration fee of $25 and if they were employed, most employers agreed to pay their registration fee. Assistance was available for anyone unable to pay.

“I am extremely excited about the program and am confident this is a necessity which will allow Madison to grow and be successful in the future,” Gross said. “Our goal is for the ESL class to become a year-round, sustainable program in the community.”

The LAIC intends to offer a second course soon which will end before Christmas. For more information, contact Gross at (605) 256-0797.