Heartland was among a group of forty-three public power electric utilities and utility organizations that recently earned Excellence in Public Power Communications awards from the American Public Power Association (APPA). Heartland earned an Award of Excellence in the Web/Social Media category in its class.

“Heartland is a worthy recipient of this award, and I am pleased that the American Public Power Association is able to recognize the utility,” said APPA President & CEO Sue Kelly.

Heartland’s winning entry was a short series of tweets related to Friday the 13th, sent from our corporate Twitter account, @HeartlandPower.

The 13th of October landed on a Friday in 2017. Calling back to the eponymous, iconic horror movie, the date is considered unlucky or incites fear and superstition. To commemorate the unofficial holiday, we opted to have fun on Twitter and draw attention to industry-related topics with a “Friday the 13th” twist. 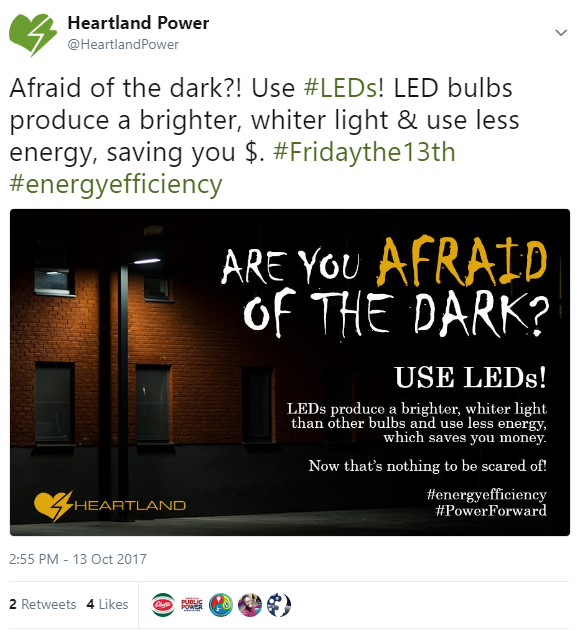 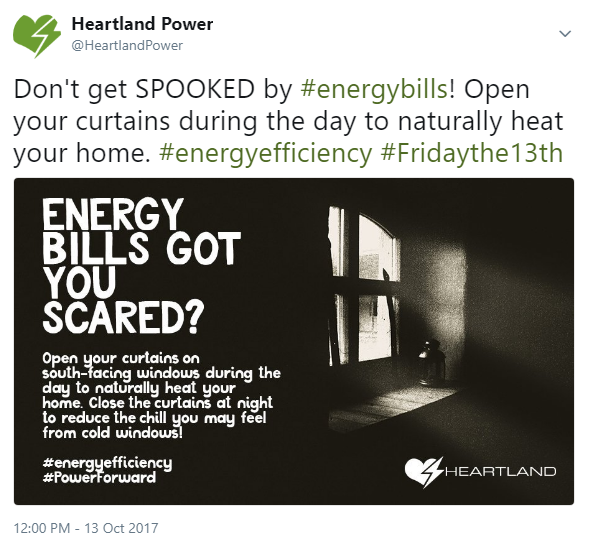 Heartland utilizes Twitter to engage with our customers, legislators and affiliates. In addition to the corporate account, CEO Russell Olson maintains @HCPD_Olson.

This is the second time Heartland has been recognized for efforts in social media. Last year, we earned an Award of Excellence in Web/Social Media for our #NoPMASale Twitter campaign.

Awards were given to those that showed ingenuity and creativity in telling their stories through outstanding copy, design, financial data presentation, graphics, social media engagement, video editing, and web layout and interactivity.

The awards were presented November 7 at the Customer Connections Conference in Orlando, Florida. A complete list of winners is available on APPA’s website.