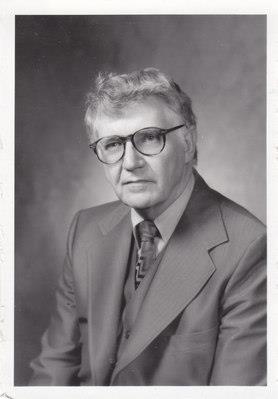 Vincent Protsch was instrumental in the formation of Heartland and served as general counsel for the District until 1993. He passed away in March.

“Vincent was the counsel when the original bonds were issued in 1977,” said former Heartland general manager and current board member Dave Westbrock. “His knowledge of the original bond issues was a great asset when it was later decided to refund those with lower interest rate bonds. He took the time to explain the original issues to me, and I always appreciated that.”

Vincent was born in Sioux City, Iowa on January 1st, 1922, to George R. and Magdalena (LaFave) Protsch. He was raised in the Catholic faith and attended Saint Boniface Catholic Grade School and Trinity Catholic High School in Sioux City, Iowa. While in high school he was a Golden Glove Boxer. He then attended Trinity College before transferring to the University of South Dakota in Vermillion where he majored in Chemistry.

With the advent of World War II, Vince enlisted in the United States Army and served in the European Theater. He was awarded the European African Middle Eastern Theatre Campaign Ribbon, the American Theatre Campaign Ribbon, the Overseas Bar Victory Ribbon, and two Bronze Stars. As a member of the Medical Corps he was with the American Troops when they liberated the Nazi Concentration Camp at Buchenwald, Germany in April of 1945.

For most of his life he kept WWII memories to himself, but shared them with his children and grandchildren in his later years. Vince was honorably discharged from the United States Army and attended the University of South Dakota Law School on the G.I. Bill, graduating with highest honors in 1948. After graduation from Law School, he briefly lived in Denver, Colorado where he was employed as a claims counsel for Hartford Insurance Company.

On August 23rd, 1950, he married Mary Gadbois at the Catholic Church in Artesian, South Dakota. Vince became a partner of the Law Firm of Mumford & Protsch in Howard, South Dakota. He practiced law into his 90’s, but fully retired to care for his beloved spouse, Mary, who was in the latter stages of her long battle with Alzheimer’s. He was a member of the St. Agatha Catholic Church and remained true to his Catholic faith until his death.

Vince served his profession in various capacities. He was State’s Attorney for Miner County from 1952 to 1954 and from 1958 to 1964 and was Howard City Attorney for over 30 years. He was instrumental in the formation of the Heartland Consumer Power District, Madison, South Dakota, serving as corporate counsel from 1968 to 1996. He also served as Corporate Counsel for East River Electric Power Cooperative, Madison, South Dakota from 1968 through 1996. He received East River Electric Power Cooperative’s Eminent Service Award in 1990. Throughout his legal career, Vince was an advocate of rural electric cooperative values and made significant contributions to the development of rural electric and power cooperatives in the State of South Dakota.

During his 10 years at East River Electric Power Cooperative and Heartland Consumer Power District, Vince was the author of “Law Memos”, an informative series of legal articles printed in the East River Guardian with a circulation of approximately 50,000 subscribers. For more than 13 years Vince’s articles had a dedicated readership. Members of the general public would often comment that Vince had a special talent for presenting articles of legal interest in a down-to-earth fashion that everyone understood and appreciated. Many of his readers collected his articles to be referred to at a later date.

Vince also devoted time, effort, financial support, and dedication to educating the general public on legal issues through many public speaking engagements. Vince felt he had an obligation to assist (on a pro bono basis) the less fortunate by representing people with limited or modest means or otherwise unable to utilize the legal system to have their rights protected.

He was president of the Committee on Uniform Legislation and a member of the National Conference of Commissioners on Uniform State Laws, Former Special Counsel to the Department of Commerce and Consumers Affairs for the State of South Dakota, Democratic candidate for State Senator in District 22, and past Chairman of the Miner County Democratic Party. He was recognized in Who’s, Who in American Law in 1983 to 1984. He was a member of the State Bar Association for 69 years and at the time of his death was the second most tenured member of the Association.

Vince was a strong supporter of the University of South Dakota Law School and has been recognized as a partner in excellence and century advocate in recognition of his generosity and outstanding service to the Law School. He was also a member of the South Dakota Trial Lawyers Association, having served as president from 1971 to 1972. He was a member of the American Legion, VFW, Sigma Alpha Epsilom, and Delta Theta Phi.

Throughout his legal career, Vince became known as a “lawyer’s lawyer”. He served as a mentor to many young attorneys both inside and outside his law firm and was always ready to take time away from his own law practice to provide guidance and support to others. During his distinguished legal career, Vince declined acceptance of Judicial appointments to the Trial Bench and the South Dakota Supreme Court citing his dedication to remaining a country lawyer.

Vince was a loving and caring father. There could be no better role model for his children, as he strived to treat everyone fairly both in work and family. He stood for the ideals of dedication, competence, professionalism, and commitment to excellence.

Vince was always a man of principle who acted consistent with his faith in God instilled in him by his mother, Magdalena.

Vince was an avid reader and loved to talk and reminisce about his experiences in life. While many a listener were challenged to get a word in Vince was famous for his extensive breath of topics for discussion going from subject to subject, but always returning to complete his story. He was known as “VJ” to his friends and professional acquaintances.

His family will mourn his passing, but remember the examples he set and the values for which he stood.

Condolences may be sent to www.willoughbyfh.com.