Graff honored with Award of Excellence

When Adam Graff joined Heartland in 2008, he quickly immersed himself in Heartland’s power supply portfolio, helping to manage resources to best suit customers’ needs. This led to him quickly being named resource manager.

Today, Graff  serves as director of power supply for Heartland, where he is responsible for the company’s power supply portfolio with additional responsibilities including facility planning, integrated resource planning, system forecasts and more.

For the past ten years, Graff has also served as chair of Public Power Generation Agency’s Engineering and Operations Committee. PPGA is the interlocal agency established for the sole purpose of constructing and operating Whelan Energy Center Unit 2 (WEC 2), a major component of Heartland’s resource portfolio.

To celebrate his years of service and accomplishments on the committee, Graff was honored at Heartland’s recent Annual Meeting with an award of excellence. 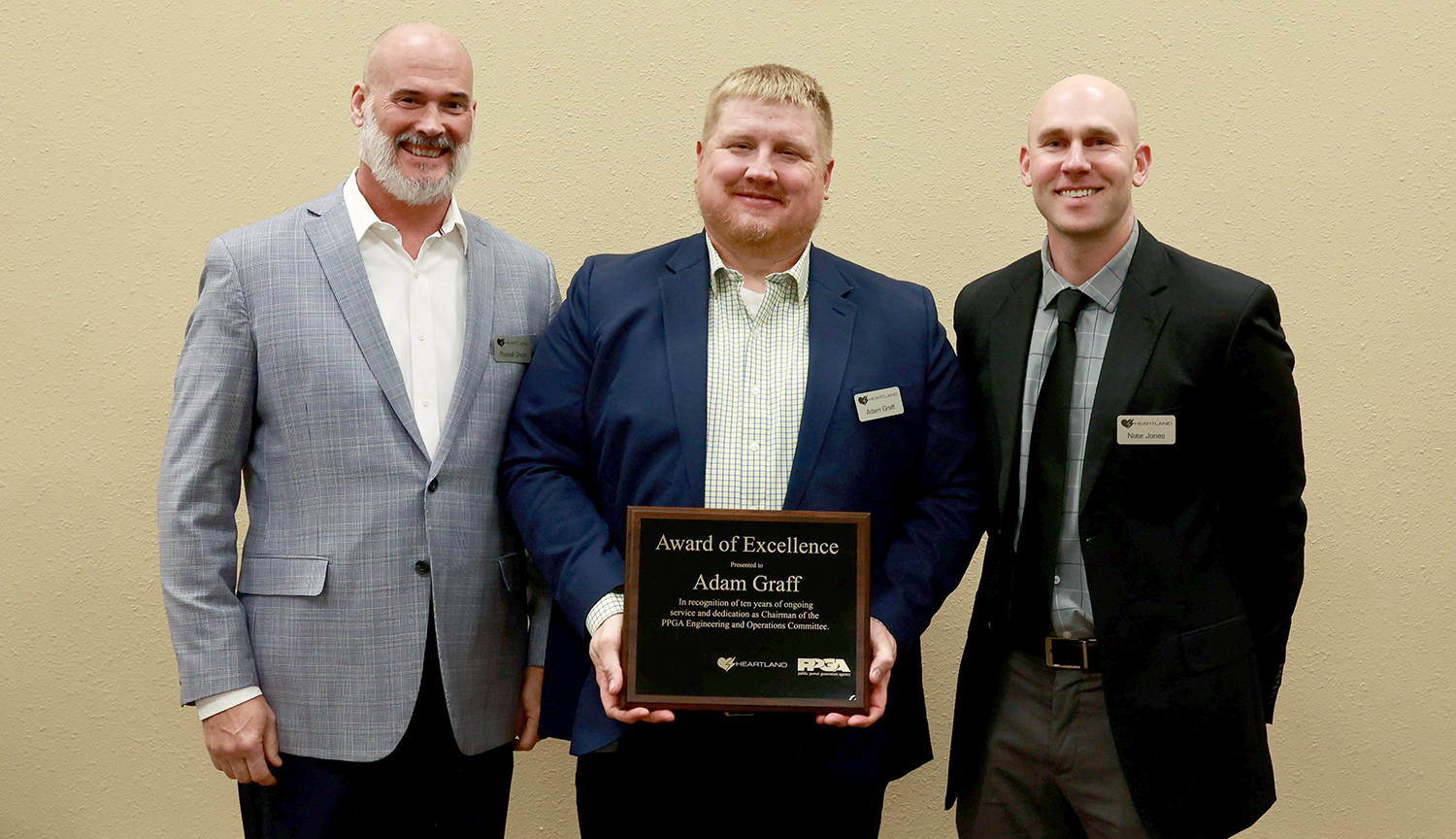 When Graff  began working at Heartland, WEC 2 was three years into design, development and construction. It became commercially operational in May of 2011. Shortly after, Graff took on the role of chair of the engineering and operations committee. As such, he plays a very significant role for PPGA and Heartland.

The 220 megawatt coal-fired generating plant is located in Hastings, Nebraska. As a participant of PPGA, Heartland owns a 36% entitlement share in the project. It serves as the largest generating resource in Heartland’s power supply portfolio, making up 53%.

WEC 2 was built for approximately $700 million and is utilized by five different utilities for reliable, baseload power. It also represents 46% of Heartland’s capacity and 35% of its energy portfolio. The success of the plant is directly linked to the success of Heartland and ultimately, Heartland’s customers.

As chair of the engineering and operations committee, Graff oversees all major operating decisions made at the plant and makes recommendations to the PPGA board. During his tenure, he successfully led the transition of the plant into the Southwest Power Pool, advised and navigated the project on many staffing changes, and consistently ensures sound budgets.

“PPGA is lucky to have Graff in this role, as is Heartland,” said Heartland Chief Operations Officer Nate Jones. “His expertise fortifies our ability to provide reliable, safe power to our customers at the lowest cost possible.”